A step in the right direction

Some time ago, we were at a football match with the CRO-team. They're actually in the top league in Uganda, so it's a good team. In the first half, Marthe and I sat under a roof on one side of the field where all the grown-ups sat. On the other side of the field there was no roof, but a mighty lively gang. The children from the CRO and many other young people were dancing and playing drums and cheering. We decided to go over there for the second half. 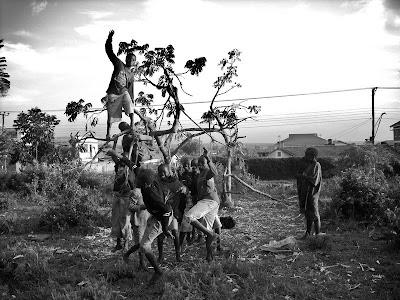 As we walked over to the other side, some of "our girls" came running towards us to greet us and make us come and sit with them. We felt very welcome, and this was indeed the more festive side. However, the seats weren't all that. There were just concrete steps with no support for the back or anything. Therefore, I decided to stand up for a bit. I left the girl I'd been devoting most of my attention to in order to stretch my legs for some time.

When I got up and freed my attention, I started noticing things. There weren't only CRO-kids with "God loves me" on their backs surrounding me. Most of the kids were probably still on the streets. Their clothes were ragged and their faces and legs were dirty. Then, I spotted a kid that's been coming to CRO for a while now. Two seconds after he caught my eye, I saw him catch something else. He snatched a bottle from another young boy. The other boy hardly reacted; he just looked up and after the CRO-boy, his eyes hazy and red. There wasn't cola in that cola-bottle. Whether it was glue or airplane-fuel, I'm not sure. Nevertheless, it was probably one of the two.

When I'd spotted the first bottle, they suddenly appeared everywhere. A closed fist against the nose, a bulk under a shirt, bottles... The singing, dancing and drumming all of a sudden got another side to it. Some of the most active dancers and cheerers had an unstable walk and woozy eyes. And the smell. It quickly became piercing. The entire place reeked of glue and fuel.

However, that wasn't the worst part of it. The worst thing was that there was no one there to stop it. No one to take the bottles away or look after the children to keep them from doing these foolish things. The children can't help it. When you're eight years old, there are limits to your long-term thinking. And most of the time, these children don't have anyone to do this thinking for them...

This is where I should have come with a hopeful ending. A bright solution. But right now, I can't see a quick-fix. The only hope for many of them might be to come to the CRO, but even that doesn't necessarily guarantee a change. However, it could be a step in the right diredtion.
Lagt inn av Silje E. kl. 01:41