Signs are made to inform people of various things. They all have some sort of a purpose. Some are made to promote a product or a service, others to help you in the traffic, tell you which street you’re on and such. I Norway, these kinds of signs are highly common. However, the common phenomenon in Uganda of signs in schools are not normally found in Norway.

In Ugandan schools they are found pretty much everywhere. They are there to inform, guide and educate the children in a variety of “subjects”. Like all other signs, there's a reason why they are put where they are and that they are saying what they say. By reading the signs in a place, you can tell a lot about said place. About what sort of information people in the area need to be acquainted with.

The signs contain information on the matters that are important and a large part of people’s lives that people still need some help in handling. The signs also say something about what the people with the power, the “sign-purchasers”, think is important. Let me illustrate with some pictures of signs from Nabuyonga Primary School in Mbale, Uganda. 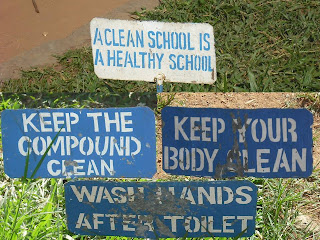 Being clean, having clean clothes and a clean surrounding is extremely important in Uganda. Lack of cleanliness is pretty much equivalent to lack of money and manners. Let me tell you a story that shows just how important this is to some Ugandans.
A friend of mine from the UK told me about a friend of his who is a water engineer. The engineer started a major project in a rural area of Uganda that was very much bothered by diseases from unclean water. He installed a water-cleansing system so that all the people in that place could access clean water free-of-charge. No more cholera and other awful diseases from water! Genius, huh? But after some time, he went to check on his project and found that no one was using the new system. He could not understand why the people refused to use the healthy water.
There was one major aspect that he hadn't considered; how much foam will the cleansed water produce when washing clothes compared to the dirty water? The answer was easy, the new water made less foam from the same amount of soap when washing clothes than the old water. The people were then left with three options;
1. Use more soap
2. Have clothes that are less clean
3. Keep on using the old water
Number one is not really an option, because soap is very expensive. The second one is not an option due to the internalized notion in the people that cleanliness is EXTREMELY important! Then, there's only one option left.
A little bit crazy, huh? But that's just how important it is to be clean! 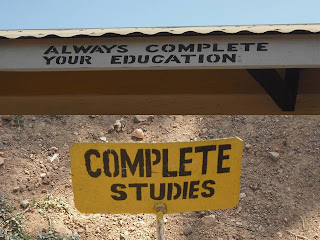 Oh, one is supposed to stay in school and finish education? In Norway, this is a given. All children go through at least ten years of school, and all have the opportunity to attend for 13 years. Most young people understand that education is important in order to have a decent life in the future. If they don’t, they probably have parents who do, and who will push/force them to continue if they’re thinking of dropping out. In Uganda, the situation is quite different. School is expensive. Furthermore it deprives the family of a source of income. Even though he or she is just a kid, they can still contribute to the family’s upkeep. When they’re in school, it’s more difficult to contribute to the income. So for some, the parents do not provide the supporting voice which encourages the children to stay in school when times get tough (this does, of course, not apply to everyone, many parents support their children going to school very keenly). And times can really get tough for the Ugandan kids, with strict discipline, very hard work and, at times, harshly direct feedback from the teachers. Therefore, it’s actually quite necessary to have these kinds of reminders around the school compound.
Lagt inn av Silje E. kl. 11:49 1 kommentar: