About the Child Restoration Outreach - CRO

I've been asked what the CRO does a lot of times, and I haven't really been sure what to answer. The CRO does so much, there are so many activities, and I don't even think I know all of them. But even though I don't know all the activities taking place, I think I can sum up what they do and why they do it by leaning on the words from Matthew 25, 35-40.

When the children are hungry, they feed them. When they are thirsty, they give them drink. 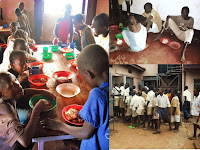 When new kids come, they are taken in. Even though they're not in the program, they can stay there and play with the others. 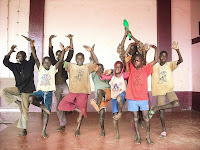 When the children lack clothes, they cloth them 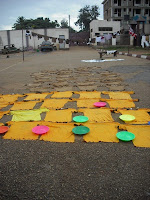 When children fall sick, they care for them at the clinic 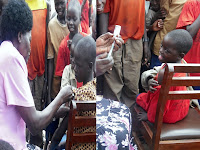 And one can wonder: why do they do all this? The explnation can be found in the fact that CRO is a christian organization and what is done to one of His smallest brothers, is done to Him.
Lagt inn av Silje E. kl. 04:18 1 kommentar:

Round-ups - street children being fenced in

As I've mentioned earlier, the police are imprisoning street children at the moment. They're having what they call a round-up. Round-ups are measures taken by the police to get children and others off the streets. They do mostly consist of policemen going around beating the children and putting them in prison. According to a friend of mine, the police can take all kids without identification papers to jail. How many children do you think remain if the police get to them? How many children go around with ID papers on them? It's outrageous.

The causes for these round ups vary; the ongoing one is, according to a teacher at the CRO, due to the uprising in Kampala between followers of the Kabaka and the president's men. The government seems to think that the street children and other residents of the streets played a big role in the riot. They find it necessary to take severe action. But it wouldn't suffice to have round-ups in Kampala, oh no. If there was a riot in Kampala that might have involved street children, there's no guarantee that it won't happen elsewhere as well. This has resulted in round-ups in all major cities in Uganda, where many street children wind up being fenced in. 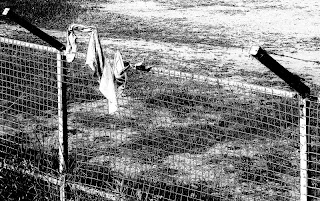 A life on the streets is not a decent life in any way. A lot of suffering and pain awaits the children that go to the streets, I've seen it myself. And if they felt like they had another choice, I hardly think anyone would choose the street life. This means that the life they left could be even worse, or at least not all that much better, than living on the streets. So I wouldn't say that these children's new situation necessarily count as success stories of the round-ups. The only positive effect in Mbale, as far as I can see, is that it brings new children to the CRO. And that is actually a rather good thing, because it's a step in the direction of education and a brighter future, a future off the streets. But not even that can justify the means of the police. There is nothing that under any circumstances can justify the abuse of children!
Lagt inn av Silje E. kl. 04:08 Ingen kommentarer:

Coping up with new realities

I can't believe that I've only been here for a week. It feels as though I've been here for months. Things are already starting to feel quite normal. But at times, it really strikes me that I'm not yet familiar with the situation. I still can't quite see what's beyond the immediate reality that I experience. This especially applies to the reality of the children I meet at the CRO. When I'm with them, they just laugh and smile and play, like all kids do. I can see that their clothes are very worn and dirty, but all kids soil and tear their clothes. Some of them are sleeping around on the premises, but I don't give it that much thought. I feel quite sleepy myself sometimes, it's nice to lie down in the shades when it's a hot day. And their blinding smiles give the impression that there's not much more to it than that. But their eyes tell a different story. Their eyes show glimpses of insecurity and despair. When I let myself really see these glimpses, I can't help but think about what causes them. The insecurity of whether they'll get another meal before lunch at CRO the next day or not. Insecurity regarding who to trust these days when the police are monitoring the streets and imprisoning street children, and other adults try to scare them from the streets by abusing them. When these thoughts occur, I get another view on the kids who are sleeping during the day. They're not merely lazy kids, escaping the burning sun. They might be among the many kids who didn't make enough money during the previous day to afford a safe place to sleep, so they had to stay up all night to not be abused. Many kids have bruises and wounds, like all kids, but I can't help but wonder how they got them. Did they just take a wrong step and fall, or did someone else cause them?

The despair in their eyes is probably caused by the fact that they can't find a way out of the current situation. They want to get out so badly, but they need help and they don't quite know which way to turn because they don't know who to trust. But even though these glimpses of despair and insecurity occur, their eyes speak of so much more. Like their smiles, their eyes also tell of the joy of playing, getting positive feedback on what they do and being given a hand to hold. And you can see the hope in their eyes, hope for a better future. Even though they don't know how to get there, they have dreams and aspirations of a better life. A life as a teacher, a pilot, a social worker or a doctor. And I think that one of the reasons they dare to dream, even when they’re in these desperate and truly unbearable situations, is that they believe what it says on the back of the CRO t-shirt; God loves me

For all who are interested, here's our new home; 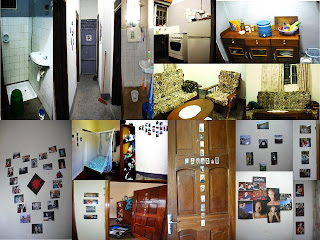 Starting from the top left side, you can see the shower, the hallway and our lovely toilet. Then we have the kitchen and the living room.
From the bottom left side, you can see my lovely pictures of my friends and family, Marthe’s room on top in the middle, and my room on the bottom. Then you can see my door (covered with pictures of friends and family) and some more pictures including ones of Team Eckbo (they were actually already in the apartment, can you believe it?!)
Lagt inn av Silje E. kl. 04:03 Ingen kommentarer:

The first blog from Uganda!

As I'm writing this blog, Marthe and I are sitting in the living room in our new apartment in Mbale. It's a good thing my fabulous computer has such a good battery, because the electricity has disappeared for the second time since we came last night. But it's all good; we've got matches and paraffin-lamps. And it's not like the temperature drops drastically as it would have in Norway.

I've been in Uganda for four days now, and I'm left with many impressions and experiences. It would take a long time to write them all, but I'll let you in on a couple of them.

African time
Of course I've had some experiences with the African perception of time. Already on the first day, this was portrayed quite clearly. We were supposed to leave our hotel at eight o'clock to go to Jinja and spend the day there. When almost all of us were ready at about ten past eight, the last person came to join us, we thought. And that would really not have been such a big deal, ten minutes isn't too much. But she wasn't coming to join us; she was calmly going to have breakfast! Fascinating :)

Feeling lost
Where am I? Something is tight around my neck, I can hardly move, everything is a white blur... What on earth is going on? Help!
It usually takes a bit longer for my logical sense to wake up than it takes for my physical senses. This resulted in a bit of panic before I managed to awake my reasonable side. Due to loud music from a club nearby, I had put on my iPod the night before and I'd obviously managed to twirl the chord around my neck, during the night I'd also twisted my sleeping-bag to form a sort of stray-jacket and the white blur was simply mine and Kaia's wonderful mosquito-net-castle. Puh! 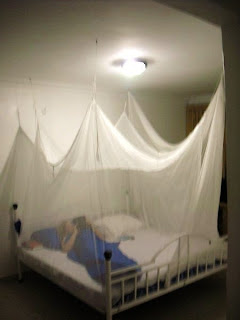 The hospitality and kindness is striking. Even when it's a more official meeting, like at the head quarters of Stromme, people are still so warm and welcoming. They greet you with a smile and ask how you're doing and they sincerely seem to be happy to meet you. The African perception enables people to take the time to be nice to each other. It’s a very good side-effect that we could really learn from in Norway! 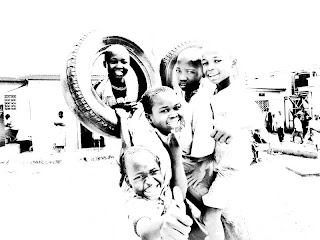